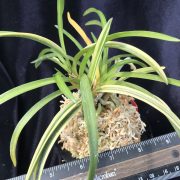 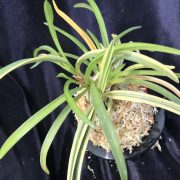 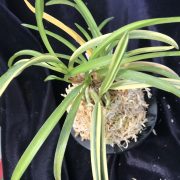 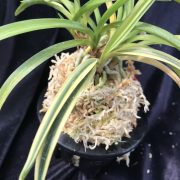 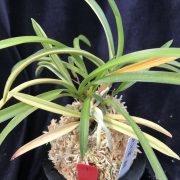 Orihime is known as representative of feminine Fukiran because of those Hime-ba(slightly curved foliages) and white stripe. Speak to feminine Fukuran, Mangetsu (Fukurin-marginal stripe variety) is called queen of Fukiran and it also has large Hime-ba. Hime-ba gives us very calm and soft image and that is associated with women. Variegation of stripe varieties are usually very changeable but Orihime’s stripe apparently are stable. Better variegation is better plant in all varieated type especially for stripe variety. In the united states, flower variety, solid base variety and marginal stripe variety are still more popular than stripe variety but actually Japanese Fukiran enthusiast have found pleasure in stripe variety the most. It is very risky because the variegation are changeable and the culture cause damage and loss of variegation a lot. But on the other hand, you have plenty of possibility to make them better!

There are no reviews yet.

Only logged in customers who have purchased this product may leave a review.

$25
Tell A Friend!
Our Products

We're not around right now. But you can send us an email and we'll get back to you, asap.