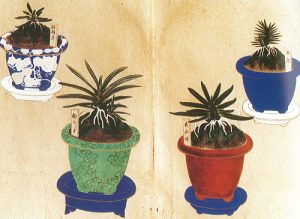 The cultivation of Fukiran has a long history, originating in Japan’s Edo era, about 400 years ago.

Furan, the Japanese name for “Neofinetia falcata,” started to be called ‘Fuki-ran’, the rich and noble orchid because they were loved by rich and noble people. Many years ago, Fukiran were covered by a gold or silver net in order to protect them and people had to cover their mouth with Kaishi (a thin paper usually used for calligraphy) in order not to breathe on the plants while they appreciated them. This, by the way, is the same way the Japanese appreciate a great sword. This was an important time for Fukiran as they became established into the Japanese culture. After the Meiji restoration in 1868, the Japanese government brought in Western culture and people became fascinated with tropical orchids that were colorful and gorgeous. Consequently, interest in Fukiran declined until the 1900’s.

In 1920, the All Japanese Fukiran Society was formed, where members would discuss and display their prized Fukiran to each other. Society members never gave up on their traditional plants. Small society meetings gave way to larger ones beginning with a big exhibition in Osaka. Since this event, Fukiran interest has been increasing both in Japan and elsewhere. . It was through the continued efforts of senior society members that Fukiran survive and thrive today in spite of many crisis that were brought by war and the march of time.

Compared to the time when most Fukiran would bring the price of a house with a big garden, many new kinds have been found and their prices have come down dramatically because of reproduction from seedlings. This has made Fukiran both familiar and available to the public. The popularity of Fukiran has expanded around the world, including Korea, Europe, and most recently, the USA. This is because with their varied leaf forms, leaf colors and flowers, they have a distinct fascination from other orchids. Fukiran also provide years of enjoyment as the plant becomes more admirable with each passing year.

We're not around right now. But you can send us an email and we'll get back to you, asap.